Companies in the energy space are all facing the same adapt-or-die circumstances. The key to powering their digital transformation with the cloud begins with a modern data infrastructure. 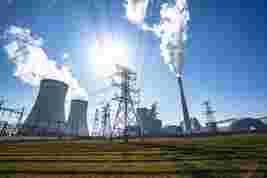 After consistent—and in some cases, exponential—growth for well over a century, the energy industry today is faced with a major hurdle: by 2030, it could see a plateau in demand. While energy consumption once grew in stride with economic development, customers today are interested in sustainability—reducing use and tapping into alternative energy sources to save costs and drive sustainability.

Companies in the industry have long been looking for new strategies to adapt. According to Deloitte Research, utilities worldwide are also facing the need to upgrade aging infrastructure, modernize and digitize operations, defend against a growing incidence of cyberattacks, and meet the demand for cleaner energy sources from legislators, regulators, and customers.

It’s a tall order. For the top utility companies in the world, embracing the future means a full-scale migration to the cloud to power their digital transformation initiatives. In doing so, they open the door to becoming truly digital businesses, open to opportunities to attract and retain customers, able to access new revenue streams, and remain nimble in the face of change.

While energy-sector companies are looking at digital transformation initiatives, almost all are still using on-premises software, and most are still very early in their cloud journey. And it’s no surprise why: application modernization when switching from on-premises systems to the cloud is no easy task; cloud transformation requires a major shift in organizational culture; leaders face a skills gap when shifting to a cloud-centric IT model; and rigorous testing is critical to a successful migration.

Imagine moving to a new home: Not everything fits the same way in the new house as it did in the old. There are consistency issues when migrating an entire on-premises database to the cloud.

Having said that, there are also a number of data-related challenges companies must overcome. Migrating terabytes or even petabytes of data to the cloud is a massive undertaking because data is distributed across multiple databases and locations that complicate workflows and must be done continually during the migration process. Any data migration efforts also need to be done in a way that doesn’t disrupt ongoing operations. Furthermore, sensitive cloud data must be secured, and teams need on-demand access to test data to test applications in the cloud, rehearse the cutover process, quickly recover in the event of errors.

An API-first data platform that automates data delivery and data compliance enables companies to easily get data ready for cloud environments and overcome these challenges. While most companies start with a lift and shift to migrate their apps to the cloud, a programmable data infrastructure has the ability to deliver masked copies of production-like data to enable extensive testing, so data teams can resolve any issues before executing the migration. The platform also streamlines the process in the following ways:

As a result, migration cycles can be 20% faster, with secure data accessible throughout the entire process. These aspects are particularly critical as companies pursue a multi-cloud strategy. Migrating to multi-cloud environments introduces a variety of threats that stand in the way of fast, efficient data movement: including more teams in play, more governance policies in place across multiple geographic regions, different tooling for applications running on diverse and distributed environments as well as an assortment of manual workflows. In these instances, therefore, the ability to test and rehearse is all the more critical before a major migration takes place.

Once in the cloud, energy companies can leverage programmable data to effectively develop and test business critical applications with greater scalability, flexibility, and efficiency. Gathering data from multiple sources into one place can produce insights about everything from company operations to customer needs—as well as quickly and easily put that data in the hands of developers to test, hone and release new apps in response. It’s a competitive edge in today’s app-driven world.

Take Enel, one of the top utility companies in the world to become all-cloud. Serving 61 million customers, this Italian multinational manufacturer and distributor of electricity and gas completed its cloud migration project when it moved 10,000 servers and 30,000 vCPUs, totaling to 6 PB of storage across 30 countries. It was a major milestone not only for the company, but for the industry.

“We look at digitalization as a necessity rather than an ambition,” Enel’s Head of the ICT Infrastructure & Networks Solution Center Fabio Veronese said when he spoke on stage at AWS re:Invent. “And our decision was clear and straightforward: go to the cloud as fast as you can.”

In addition to the ability to quickly test and release apps, cloud infrastructure is also more scalable to handle peaks and valleys in development cycles. That means companies are able to conserve resources when possible—but aren’t held back by a lack of them.

App Development in the Cloud Spells Opportunity for Energy Companies

Beyond improving existing processes, data in the cloud can generate new insights about the business and help development teams ideate and test new business models, ultimately taking new products and services to market. IoT is one data stream that’s on the rise in the industry, for example, and companies who are in the cloud can more nimbly develop new solutions that drive revenue around this growing trend.

Whether it’s updating and releasing existing software and microservices, or embarking on a project to generate entirely new revenue streams, companies need access to fast and secure data in order to develop in the cloud and evolve at the breakneck pace technology demands. Because ultimately at the end of the day, the path to any digital transformation initiative starts with your data.