The process of upgrading an E-Business Suite (EBS) system is one requiring dozens or hundreds of steps. Think of it like climbing a wall. Each handhold or foothold is analogous to one of the steps in the upgrade.

Written by: Mike Swing -- The process of upgrading an E-Business Suite (EBS) system is one requiring dozens or hundreds of steps. Think of it like climbing a wall. Each handhold or foothold is analogous to one of the steps in the upgrade. What happens if you miss a handhold or foothold? If you are close to the ground, then the fall isn't dangerous, and you can get restarted easily. But what happens if you're 25 or 35 feet off the ground? A fall from that height can result in serious injury, unless you are strapped to a climbing rope to catch your fall. And that is role that EBS backups play in any lengthy process with many discrete steps, such as an Oracle EBS upgrade. Performing a EBS backup of the systems you're upgrading every half-dozen or dozen steps allows you to restore to the most recent backup and resume work while having only lost a relatively small amount of work. But think of the costs of taking a full backup of the systems you're upgrading. Let's assume that the Oracle EBS database is 1 TB in size, the dbTier is 4 GB, and the appsTier is another 4 GB. All told each backup takes up over a TB of backup media and takes 2 hours to perform, start to finish. So, for an upgrade process of 100 steps, and performing a backup every dozen steps, means performing 8-9 backups, at 2 hours apiece, totaling 16-18 hours alone! Not only do the backups represent a significant portion of the total number of steps to perform, but those steps also consume a significant portion of the total elapsed time of the entire upgrade process. So, in the event of a mistake or mishap, it will take about 2 hours to restore to the previous backup, and then the intervening steps have to be replayed, which might take another couple of painstaking hours. Because of this high cost of failure, believe it that each step will be double-checked and triple-checked, perhaps by a second or third person, before it is committed or the ENTER key is pressed. No wonder upgrading Oracle EBS is so exhausting and expensive!

The fastest operation is the one you never perform

The first two items are vFiles, containing the file system sub-directories representing the E-Business Suites R12.1 applications tier and database tier, respectively. The last item is a virtual database or VDB, containing the Oracle database for the E-Business Suites R12.1 system. Each are indicated as dSources by the circular black dSource icon with the letters "dS" within (indicated below by the red arrows); 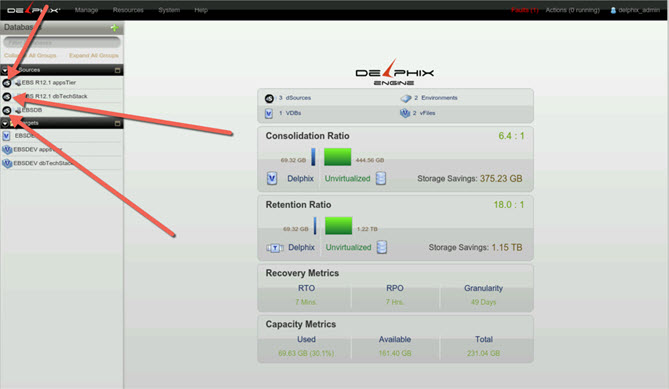 The three dSources have been encapsulated within the Delphix JetStream user-interface within a templates, as shown by the JetStream icons showing a tiny hand holding out a tiny cylinder representing a datasource (indicated below by the red arrows) just to the right of the dSource icons; 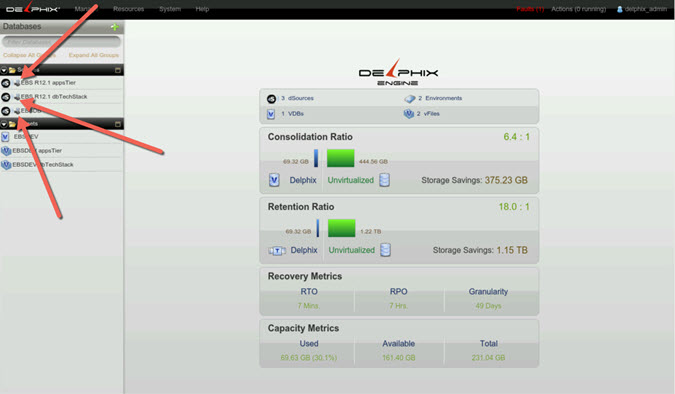 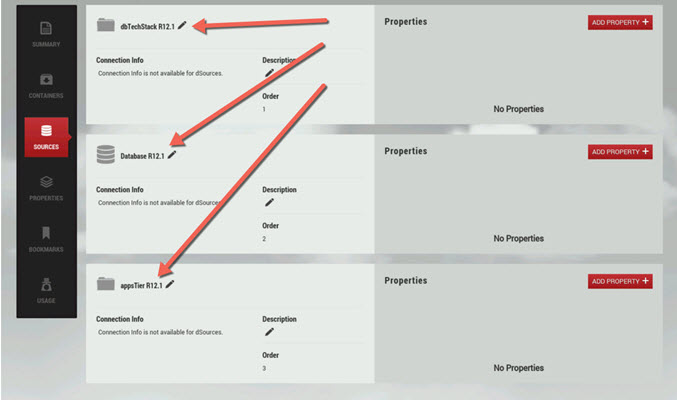 Once dSources are encapsulated as a JetStream template, then we can encapsulate VDBs and vFiles created from those dSources as JetStream containers. Here, we see the database group or folder called Targets circled in the left-hand navigation bar, and the blue icons for VDBs and vFiles with the letter "V" within are indicated by red arrow, while the darker icons for JetStream Containers are indicated by the green arrow; 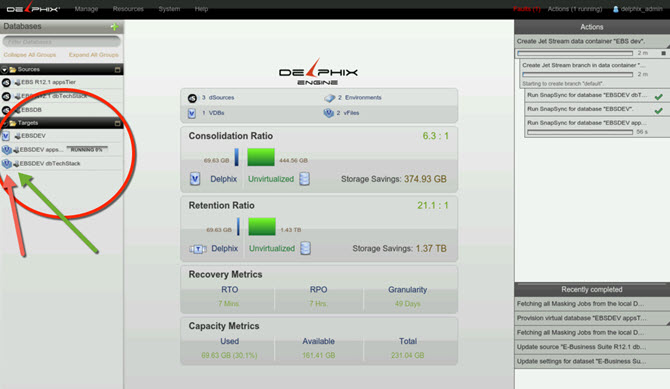 With an entire Oracle EBS system stack under the control of Delphix JetStream, we can begin the lengthy process of upgrading Oracle EBS. Before we begin, we should create a JetStream bookmark called Upgrade Step 0 to indicate the starting point of the upgrade; 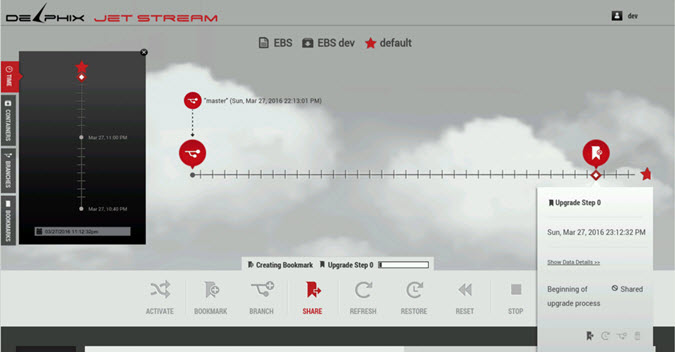 Then, after performing the first five steps of the upgrade in the Oracle EBS system stack, come back to the JetStream user-interface and create a JetStream bookmark namedUpgrade Step 5, as shown below; 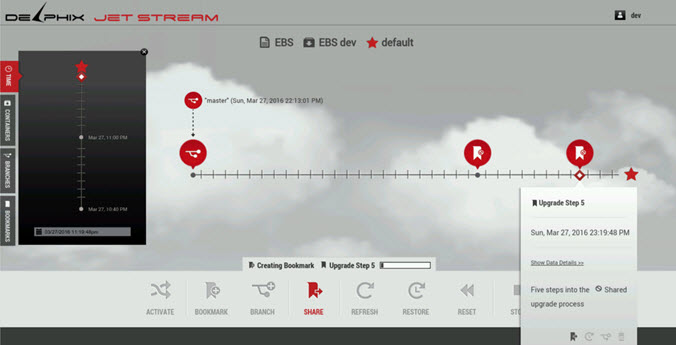 After every couple steps of the upgrade, or prior to any lengthy step, come back to the Delphix JetStream user-interface and create a bookmark named appropriate for the step in the upgrade process, as shown below; 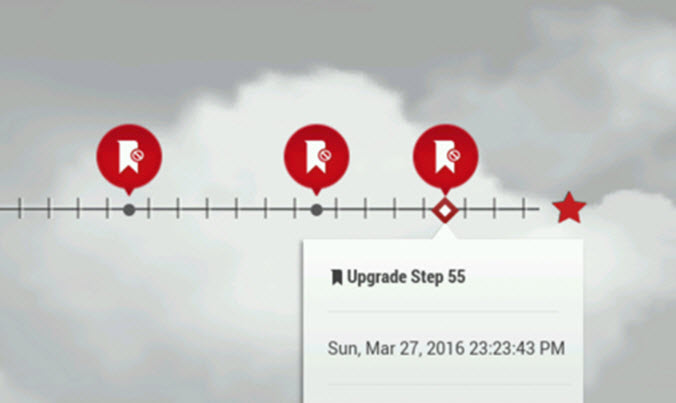 Performing a rewind in a JetStream container for Oracle Oracle EBS

So we're cruising along, performing productive steps in the Oracle EBS upgrade process, and not worrying about making backups. WHOOPS! At upgrade step 59, we made a serious mistake! If we had been making backups every 12 steps or so, then the most recent backup may have been Upgrade Step 48, which was 11 steps ago. Besides the multiple hours it may take to restore the backup in the database, the dbTier, and the appsTier, we are going to have to perform 11 steps over again. In contrast, using Delphix JetStream, we have better choices. From the Delphix JetStream user-interface, we can restore to any point-in-time on the timeflow, whether it is one of the bookmarks we previously created at a known step in the upgrade process, or to any point-in-time location on the timeflow line, which may or may be located in the middle of one the upgrade steps, and thus not a viable point from which to restart. So, because we want to restart the upgrade from a known and viable step in the process, we're going to restore the entire Oracle EBS systems stack consistently back to the JetStream bookmark Upgrade Step 55;| 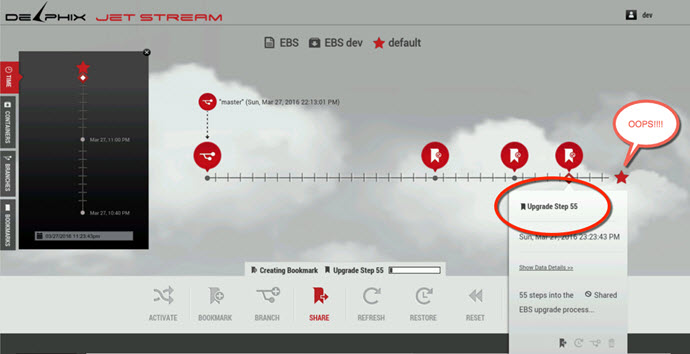 So, first let's click on the JetStream bookmark named Upgrade Step 55 and then click on the icon for the Restore operation to start the rewind;

After being prompted Are You Sure and then confirming Yes I Am, then the Restore process starts to create a brand new timeflow for all three datasources in the container;

Please notice that the old timeflow is still visible and accessible to the left in the JetStream user-interface, even with the new timeflow being restored to the right. Finally, the restore operation completes, and now all three parts of the Oracle EBS systems stack (i.e. appsTier, dbTier, and database) have been restored to Upgrade Step 55 in about 15 minutes elapsed time, a fraction of the 2 hours it would have taken to restore from backups.   Now we can resume the Oracle EBS upgrade process with barely any time lost!

So a few things to bear in mind from this example when using Delphix Jetstream;

It is difficult to imagine not performing Oracle EBS upgrades using the methods weave used for decades, but the that time is here. Data virtualization, like server virtualization, is fast becoming the new norm, and it is changing everything for the better. Come check Delphix out at Collaborate! I will be there signing books and talking about EBS. Can's make it? That is okay, check out this recent webinar I did with Delphix, Avoiding The Pitfalls Of An Oracle E-Business Suite Upgrade Project

All companies need to innovate faster. But in the race towards transformation, businesses can only move as quickly as their slowest IT systems.
Read Blog

ERP: Where DevOps Breaks Down

DevOps is no longer something that you hear about only at Netflix, Facebook, and Amazon. In fact, most Global 2000 companies have already created a DevOps initiative. But the reality is that most CIOs have yet to fully embrace DevOps.
Read Blog