The multitenancy functionality introduced in 12c allows for databases to be operated with less overhead infrastructure. This is a natural combination with Delphix.

2017 was the year that we finally saw broad Oracle 12c adoption from our customers. This in itself is somewhat remarkable (the initial version of 12c was released in 2013!) but Oracle customers run some of the most complex databases in the world, so upgrades must be carefully planned. We suspect a lot of this has to do with the release of 12.2 and the confidence that a second release gives Oracle customers! It will be fascinating to see how this adoption changes with Oracles announced intention to release annually (starting with Oracle 18). This year our customer usage data show 12c is finally above 25% of all usage. However, we still see limited use of 12c’s multitenancy (estimates <10%). 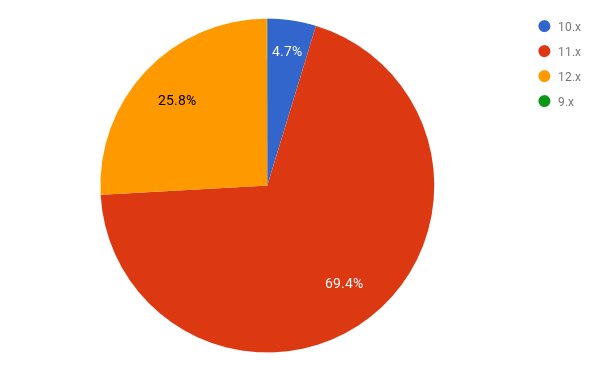 Delphix Oracle Usage by Version: 12c finally cracked 25% although use of multitenancy is limited. This is a rise of about 10% in a year, easily the biggest move in our customers’ database usage. Note: your eyes do not deceive you - there are still a handful of 9.x databases out there.

While the multitenancy usage is still limited, our customers have announced their intention to move to it broadly in 2018 - either with 12.2 or 18. In particular, we’ve seen our customers plan to adopt multitenancy in non-production environments. Production database instances are largely tuned for production workloads, but there’s an increasing desire to better leverage infrastructure with the consolidation benefits of multitenancy for development and tests. The multitenancy functionality introduced in 12c allows for databases to be operated with less overhead infrastructure. This is a natural combination with Delphix. We provide on-demand, developer controlled instances with dramatically reduce operational and storage costs while 12c with multitenancy simplifies the process of running many databases and reduces server infrastructure cost.

In 5.2, we’re introducing the ability to create Virtual Container Databases (vCDBs) as well as to move Virtual Pluggable Databases (vPDBs). This allows Delphix to be used with 12c multitenancy instances - automatically creating vCDBs and vPDBs as well facilitating movement of vPDBs. This movement of vPDBs allows to creation of dense non-production instances - ensuring optimal usage of high value infrastructure.

Over time, we expect to continue to go down the path of support more options on automatic and manual configuration of Oracle multitenant databases. We recognize that there’s no single best way to configure and use Oracle and that even the best practices change over time. While we talk at a high level about “database virtualization,” the reality is that it’s becoming increasing different by platform as each database platform (Oracle, SQL Server, SAP HANA, IBM DB2, etc.) provide different values and focus on different use cases. We expect that we will continue to offer differentiated and divergent offerings - particularly as we take aim at non-traditional databases: structure files, NoSQL data stores and PaaS databases.

Up next: how data masking became mainstream and how it needs to evolve in the future.