The world's biggest and most successful companies are not just tech companies. They are data companies—masters of data management. 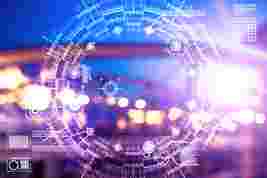 An economy in flux, a global pandemic, international competition—these are all forces keeping organizations on their toes. But perhaps more than any other threat to business success today is the prospect of falling further behind and lagging in the digital transformation race. Tech savvy companies, especially those born in the cloud, continue to keep the world on a treadmill to innovate faster—even through the most recent economic downturn.

The more technology bleeds into every facet of business, the more digital natives are raising the bar for companies across industries—not just in tech, but also in retail, insurance, finance, and more. Even though 93% of executives believe that digital is critical to achieving their strategic goals, only 10% say their organization is actually set up to capture the potential of digital opportunities.

In our work helping companies adapt their data practices to transform for the digital age, we’ve seen common threads. These common threads are what makes a company a successful data company—one that’s prepared to adapt and innovate no matter what new changes emerge.

A New Kind of Tech Leader for Modern Business

Leadership teams with technology in their DNA coupled with a software-enabled digital foundation is a winning combination.

Take Nike for example: In 2020, the company appointed John Donahoe as its new CEO to continue to lead the tech charge. Donahoe is a software veteran, having been president of eBay Marketplaces and CEO of cloud computing company ServiceNow. Since then, the athletics company has made strategic infrastructure investments that allow it to leverage fast, scalable, and secure access to data to fuel its digital-first mindset. These investments have allowed the company to remain agile and, even through the pandemic, accelerate toward $50 billion in revenue.

Tyson Foods, Inc., one of the world’s largest food companies, has also recently installed a tech veteran at the helm. In the fall of 2020, Dean Banks took over as CEO. Banks’ leadership experience spans X (formerly Google [x]), SEED Ventures, IntraCellular Technologies (now Vergent Bioscience), Cleveland Clinic Innovations, and more. Prior to his joining, digital transformation was already taking place under the leadership of Chief Information Officer Scott Spradly, who led the separation of Hewlett Packard Enterprise and merger with Computer Science Corp. to form a $25 billion publicly-traded company.

“We have driven fast and driven hard to try and modernize this company,” Spradley said during an interview. “The scale is massive but we ought to be a technology company that also happens to be the preeminent protein company on the planet.”

By affixing these tech-first execs at the top, Nike and Tyson are changing the companies’ relationship to technology. Rather than a siloed department or a facet of the business, technology is a business and innovation partner and part of the company’s core strategy.

Business and technology leaders are hyper-aware that staying ahead of competition requires rapid software release cycles. But for many enterprise companies, especially in the financial services industry, mainframes still power core business processes. Mainframe applications and data are the bedrock of customer experience, supporting 72% of customer-facing applications, according to Forrester. And migrating mission-critical workloads off the mainframe have proven to be a laborious, futile endeavor.

One of the ways to embark on this transformation is to bring API-driven data automation to mainframe data. Code, servers, storage, compute, and networks have all been automated and can be managed via APIs, but data still remains heavy, slow, and complex. To accelerate digital transformation and increase the ability to compete in the modern world, companies need an automated data infrastructure—where data can be programmatically configured, triggered, and monitored via APIs.

Ally Financial, one of the leading online-only banks in America, serves 8.5 million customers with a variety of products and services. Ally’s success is largely due to its ability to continually leverage its data and digital capabilities. Just during the last few years, the company migrated off its mainframe to a modern architecture. By freeing up mainframe data, Ally has been able to drive continuous development and roll out new products faster than ever—even in the wake of the pandemic.

Consumer Trust is the Currency of Modern Business

Enterprise data is a strategic asset that requires many layers of protection and governance. On production systems, authentication, authorization, and auditing by data security teams ensure that data is handled appropriately. But for non-production environments used for development, maintenance, and testing, there’s an enormous increase in the surface area of risk for exposure of sensitive production data.

Outsourcing, off-shoring, and the cloud only magnify the risk of data theft. Moreover, 2020 brought several major developments in the world of data protection regulation. Most notably, the California Consumer Privacy Act (CCPA) went into effect on January 1, 2020. Since the CCPA’s passage, there have been a handful of countries with GDPR-like legislation passed during COVID-19, including Brazil, Australia, South Korea, among many others. In the United States, new privacy legislation was considered in at least 30 states and Puerto Rico in 2020.

With API-driven data automation, also known as programmable data, de-identifying or anonymizing data can be done with just a few lines of code, ensuring software teams only work with masked, compliant datasets for development, testing, and analytics.

For companies who handle lots of consumer data, the penalties can be severe: a breach exposing records for one million California residents could result in as much $2.5 billion in fines. Today’s successful data companies can speed up application development timelines while meeting compliance requirements. At the end of the day, companies should protect data not because it’s mandated but because customers expect it. Businesses are gambling with their reputation when they fail to prioritize security and privacy.

Every company is a data company—it’s been a growing refrain in business. With each new advancement, the need to improve data practices increases.